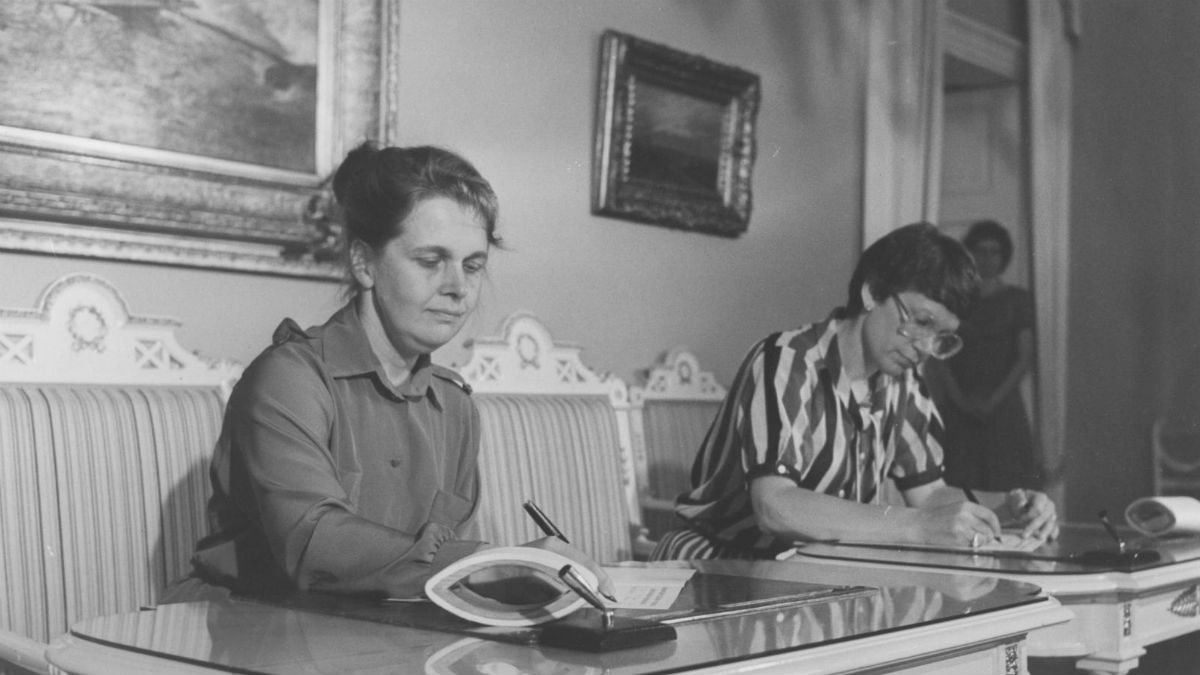 “I have always been fascinated by impossible challenges and tasks, such as care for the elderly, mental health and world peace. To me, they are a mission impossible, something that I will never get tired of striving for and will always travel the world to promote.”

In 1984, Vappu Taipale, together with Eeva Kuuskoski-Vikatmaa, her ministerial colleague, signed a petition organised by medical doctors on the abolition of nuclear armaments. Paasikuva/Työväen Arkisto

During her career, Vappu Tuulikki Taipale has promoted social justice and the peace movement in a number of ways. She was Minister of Social Affairs and Health at the beginning of the 1980s.

Taipale graduated as a specialist in child psychology in 1970 and was awarded the degree of Doctor of Medicine and Surgery at the University of Helsinki ten years later.

Vappu Taipale was brought up by her mother, who had been widowed during the war, and her grandparents, who were active in the labour movement. She worked as a child psychiatrist and a specialist at the paediatric clinic in Helsinki and as Associate Professor of Child Psychology in Kuopio.

Taipale, who served as the chair of Sosiaalidemokraattiset Naiset, the organisation of social democratic women in Finland, from 1983 to 1990, has never stood as a candidate in parliamentary elections, but ran for the chairmanship of her party in 1987 and for presidential candidate of the party in 1994. She was motivated by the promotion of women’s rights and influencing in society.

Taipale was appointed as Minister of Social Affairs and Health to Kalevi Sorsa’s third Government. She continued to serve as the second Minister of Social Affairs and Health in Sorsa’s fourth Government. Taipale considers the legislation on children’s daycare the most important achievement during her terms as a minister. The act that entered into force in 1985 enabled families to choose between a place in municipal daycare and child home care support.

When her ministerial responsibilities ended in 1984, Taipale was appointed as Director General of the National Agency for Welfare and Health. From 1992 to 2008, she served as Director General of STAKES, the National Research and Development Centre for Welfare and Health. Under the leadership of Taipale, STAKES became a centre of expertise and research centre focusing especially on inequality, mental health issues and the position of the elderly and children in society.

Taipale has been active in a number of organisations and associations to promote issues she has considered important, such as pacifism, equality and social justice. She has published several articles and books in the fields of both psychiatry and social and health policy.

Vappu Taipale was awarded the title of Professor in 1991. Her husband is psychiatrist Ilkka Taipale, who was also a Social Democratic member of Parliament.

“I have always been fascinated by impossible challenges and tasks, such as care for the elderly, mental health and world peace. To me, they are a mission impossible, something that I will never get tired of striving for and will always travel the world to promote.” (Minkkinen, Merja: ”Vappu Taipale – tavoitteena maailmanrauha, hyvä vanhuus ja mielenterveys.” Website of the Naisten ääni project)

Vappu Taipale, Minister of Social Affairs and Health, comments on letters sent by young people on a YLE programme called “Moi” (“Hi”), aired on 28 November 1983, talking, among other things, about the reform of the Child Welfare Act at time stamp 22:52 – 26:52.