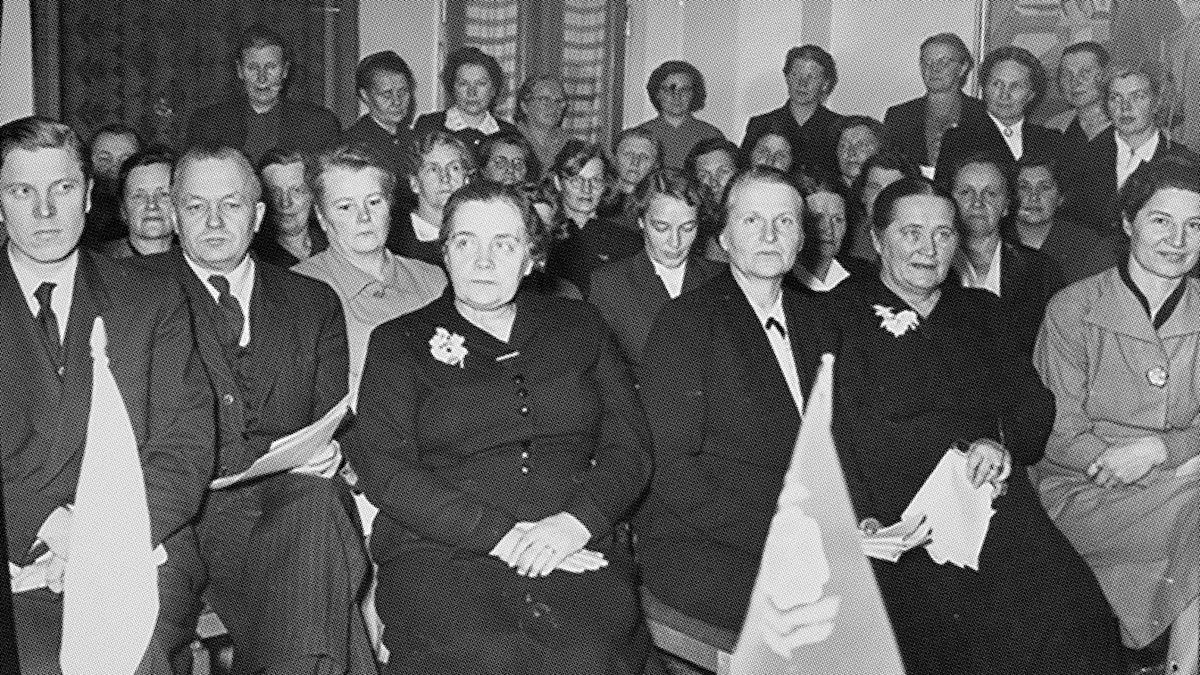 Vieno Simonen (in the middle) at a meeting of women representing the Agrarian League in 1953. The front row also has Johannes Virolainen (on the left), V.J. Sukselainen, Kerttu Saalasti, Hilja Väänänen and Kaarina Virolainen. Pekka Kyytinen/Finland's National Board of Antiquities

Vieno Simonen was the first female non-socialist minister. She was also a pioneer of women’s organisations and a reformer of social policy.

A daughter of a vicar, Vieno Simonen went to a girls’ school and to the handicraft school of the Ladies’ Association of Kuopio. She first worked as a trainee in the post offices of Pulkkila and Iisalmi. After having completed the qualification of postal workers in 1921, Simonen found work as an office assistant at the post office of Hammaslahti in Pyhäselkä. She married Oskar Simonen the following year. The couple lived at Häyrylä farm and had seven children.

After the death of her husband in 1938, Simonen took over the responsibility of the farm. The municipal positions of trust in which her husband had previously served began to accumulate to Simonen. In addition, she was active in the Lotta Svärd organisation and in the housewives’ association Marttaliitto.

Simonen’s career in national politics began in 1948. Five years later, she was appointed as the second Minister of Social Affairs to Urho Kekkonen’s fourth Government as the first female representative of a non-socialist party. Simonen, who was described as moderate and capable of cooperation, was well suited for a ministerial post in the difficult political conditions of the 1950s. Indeed, she was the first or second Minister of Social Affairs or the second Minister of Agriculture in five different Governments, only one of which served longer than two years.

During Simonen’s ministerial terms, significant reforms were carried out in social welfare services through the acts on earnings-related pensions and the acts governing family policy. Even as a Member of Parliament, Simonen focused particularly on women, poor families and rural populations. Her work is apparent in the national pension reform carried out in 1957, which granted a flat-rate pension to female farmers, for example.

Simonen was a pioneer in engaging women in her party’s activities. She was a member of the party council and the central board of the Agrarian Party and a member of the council and board of its women’s organisation. As the chair of the party’s North Karelia district, Simonen played an important role in planning its operation. She also served in an international position as the chair of Pohjoismaiden Emäntäliitto, the Nordic union of housewives.

Simonen was a presidential elector three times. She did not seek to be re-elected to Parliament in the elections of 1962. However, she continued to serve in positions of trust and engage in organisational responsibilities, among others as the chair of the delegation of Marttaliitto (1953–69).