Restrictions during the coronavirus epidemic 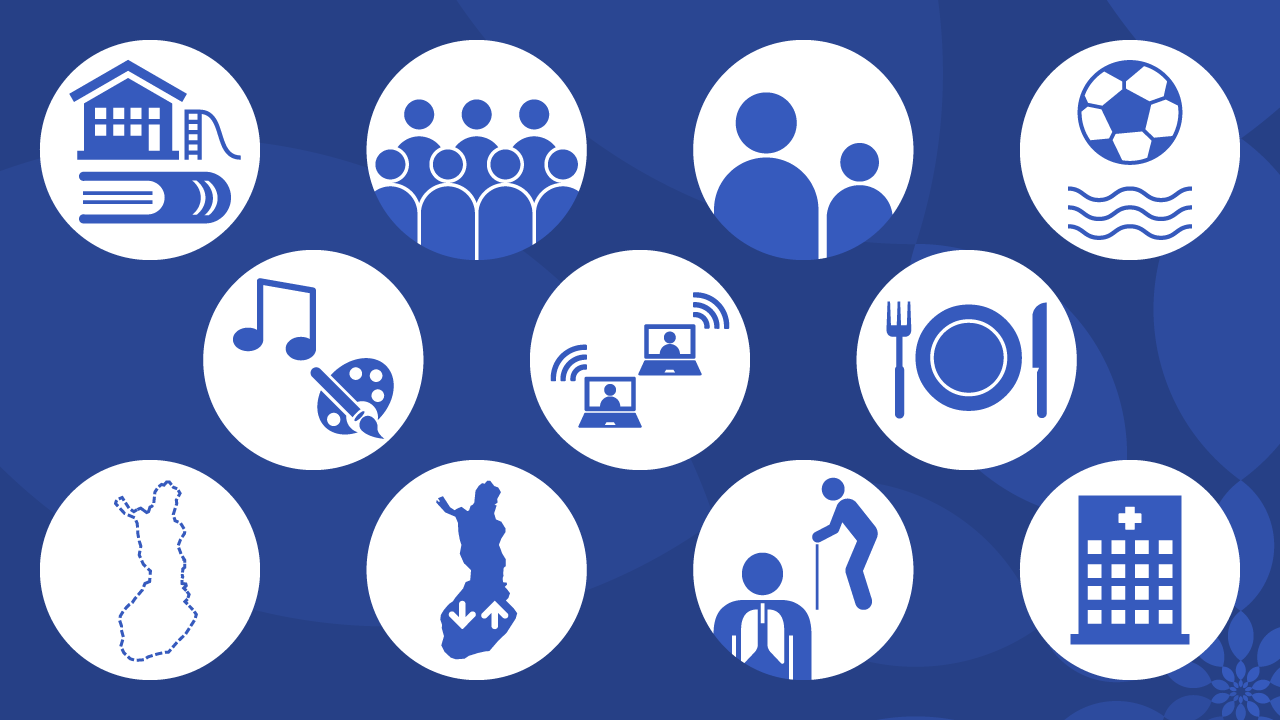 The purpose of the restrictions and recommendations in force during the coronavirus epidemic is to slow down and prevent the spread of the coronavirus in Finland, to safeguard the resource capacity and resilience of our healthcare system throughout the country, and to protect people, especially those who are the most at risk.

Any new decisions and resulting guidelines will be updated on this page.

The Government recommends that people comply with the guidelines on safe distances and hygiene at gatherings. On 14 May, the Ministry of Education and Culture and the Finnish Institute for Health and Welfare issued guidelines on preventing coronavirus infections during public events.

The Regional State Administrative Agency has decided that public events of more than 500 persons will be prohibited until 31 August.

It is possible to have a total audience of more than 500 persons at outdoor events where there are several sections or demarcated areas intended for audiences.

Indoor events with more than 500 persons may also be permitted from 1 August onwards with special arrangements. The arrangements must comply with the guidelines issued on 14 May by the Finnish Institute for Health and Welfare and the Ministry of Education and Culture on preventing the spread of coronavirus infections. If necessary, audiences must be divided into separate areas to ensure safety.

The Government recommends that people comply with guidelines on safe distances and hygiene when gathering together. On 14 May, the Ministry of Education and Culture and the Finnish Institute for Health and Welfare issued guidelines on preventing coronavirus infections during public events.

When arranging camps for children and young people, it is recommended that the size of the groups be restricted to a maximum of 50 persons.

Citizens of Finland always have the right to return to Finland, and everyone has the right to leave the country. The Government recommends avoiding unnecessary travel to countries other than those for which the restrictions on entry have been lifted. The situation will be assessed approximately every two weeks.

On 8 July, the Government decided that the limit value for lifting the restrictions on entry at Finland’s internal borders would be eight new cases of COVID-19 per 100,000 people in the previous 14 days. Alternatively, the lifting of internal border controls and entry restrictions may be considered if a country has had a maximum of 10 new cases of the disease per 100,000 persons in the previous 14 days.

Following its assessment of the epidemiological situation on 6 August, the Government decided to reinstate internal border control for traffic between Finland and the Netherlands and between Finland and Belgium. The reinstated restrictions will enter into force on Monday 10 August.

Earlier they were reinstated for Finland and Austria, Slovenia and Switzerland. These countries have seen an increase in the number of COVID-19 infections since the previous assessment.

Return traffic to Finland, commuting and other essential traffic will be allowed from the entire Schengen area. Although Finland has lifted internal border control and quarantine recommendations for certain countries, these countries may have their own restrictions on the entry of tourists.

Unrestricted travel will be permitted from 13 July:
Cyprus, Ireland, San Marino and the Vatican

Restrictions will continue:
Andorra (as of 10 August) Bulgaria, Croatia, Romania, the United Kingdom and Monaco

On 30 June, the Council of the EU adopted a recommendation on the lifting of restrictions on border traffic from certain countries outside the EU. Traffic between Finland and the countries on the ‘green list’ will be opened up subject to certain restrictions if the number of new infections in the country does not exceed eight per 100,000 persons during the previous 14 days.

From 27 July onward, traffic between Finland and the following countries will be allowed without restrictions:
Georgia, Japan, New Zealand, Rwanda, South Korea, Thailand, Tunisia, Uruguay and China, provided that the Council of the EU confirms reciprocity with China.

Restrictions on external border traffic will remain in force:
countries on the green list where the number of infections exceeds the assessment criterion set by Finland (Algeria, Australia (as of 27 July), Canada, Montenegro, Morocco, Serbia) and other third countries.

Return traffic to Finland, transit traffic at Helsinki Airport and other essential traffic will be allowed at the external borders. Family members of Finnish citizens may enter the country regardless of nationality. The entry of berry pickers at the invitation of their employer is permitted.

Travel within Finland is allowed as long as health and safety guidelines relating to coronavirus are observed.

All travel must be avoided when ill. During travel, it is important to observe good hand and respiratory hygiene. It is important to avoid unnecessary physical contact Tourism businesses must pay particular attention to cleaning, preparedness planning and training of staff.

The Government is no longer issuing an age-based recommendation to avoid physical contact. However, it is wise to take a cautious approach to close contacts, using individual discretion and taking into account the risk factors. It is important for everyone to follow the general guidelines to reduce the risk of infection.

The Government recommends that, as a general rule, access to the actual customer premises of units providing 24-hour care and treatment remain limited to their staff. This recommendation does not apply to persons providing essential services to clients, such as rehabilitation workers or personal assistants. Older clients and clients belonging to other risk groups must be given the opportunity to meet their loved ones safely, for example outside or in separate meeting rooms. The activities of care units must support clients’ functional capacity in a variety of ways.

People who are critically ill or in hospice care must be given the opportunity to meet their loved ones safely.

The Government recommendation on avoiding visits to hospitals is no longer in force. This applies to both specialised medical care and primary healthcare.

Discretion must be exercised when organising visits according to the situation in the area. The operating unit is responsible for the practical arrangements, such as ensuring the use of personal protective equipment and providing appropriate meeting places.

People who are critically ill or in hospice care must be given the opportunity to meet their loved ones safely.

The Government recommends that universities, universities of applied sciences, upper secondary schools, vocational schools, liberal adult education and basic adult education institutes continue distance learning until the end of the semester. It has been possible to resume contact teaching since 14 May.

In basic education in the arts, the organisers themselves can decide whether they will continue distance learning or return to contact teaching.