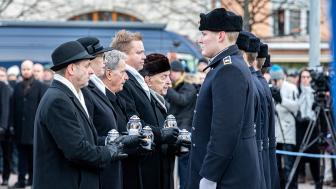 Saturday 30 November marked the 80th anniversary of the outbreak of the Finnish Winter War. To commemorate the start of the war, state leadership laid a wreath at the National Memorial to the Winter War at Kasarmitori Square in Helsinki. After that, 105 candles were lit at the memorial, one for every day of the war, to honour the Finns, volunteers from abroad and friends of Finland from all over the world who lived at the time of the war.