History of the Finnish Government 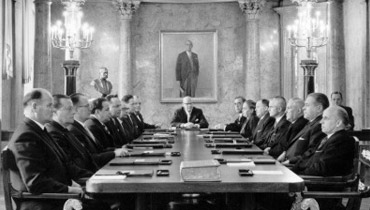 The War of Finland in 1808-09 brought the transfer of Finland from Swedish rule to become an autonomous grand duchy of the Russian empire. In 1809 the new Grand Duchy of Finland received its own central administration under the leadership of a Governing Council, from 1816 the Imperial Finnish Senate. The Senate, which contained an Economic Division and a Judicial Division, was responsible for the general administration of the Grand Duchy. Both divisions were under the formal chairmanship of the Russian Governor-General.

Towards the end of 1918, the names of the Senate and its administrative departments were changed by decree, with the Economic Division of the Senate becoming the Government of independent Finland and the administrative departments becoming Government ministries. The senators similarly became ministers, with the Vice-Chairman of the Economic Division becoming Prime Minister. The Senate Chancery was renamed the Prime Minister's Office, while the Procurator became the Chancellor of Justice. The Judicial Division of the Senate was separated from the executive wing and divided in two to produce the Supreme Court and the Supreme Administrative Court.

In addition to the Prime Minister's Office, the independent Republic of Finland began with a total of 11 ministries:

From minority governments towards majority coalitions

During Finland’s period of independence, its governments have exchanged parliamentary instability for a series of more permanent, majority coalitions. Of the 19 governments that served prior to the Winter War, 14 were minority or caretaker governments. During that period, even majority governments were short-lived. An exception was T.M. Kivimäki's minority government, based on a centrist coalition lasting almost four years, between 1932 and 1936.

Most governments were formed by non-socialist parties on the centre right and left. The Social Democrats first entered the government in 1926-27 when the party assumed office alone as a minority cabinet. The next time was in 1937, the year of the first red-earth cabinet coalition.

During and after the war, the prevailing national consensus required broad-based governments. However, the wartime governments were fairly short-lived. In the post-war period, even the extreme left entered the government.

The 1950s and early 1960s saw diverse, ever-changing government coalitions. The key government party was the Agrarian Union/Centre Party. Between 1966 and 1987, governments were mainly based on centre-left coalitions, sometimes termed popular front governments.

A left-right coalition served between 1987 and 1991, followed by a non-socialist centre-right coalition between the Centre Party and the National Coalition Party in 1991–1995. In the Lipponen government elected in 1995, the Greens and a broad spectrum of leftist parties were represented, as well as the National Coalition Party.  The traditional red-earth government cooperation between the Centre Party and the Social Democratic Party was reassumed by the 2003 Jäätteenmäki Government and in the work carried out after it by the Vanhanen Government.

The second Vanhanen Government, from the spring of 2007, was a majority coalition formed by the Centre Party, the National Coalition Party, the Green League and the Swedish People’s Party of Finland. Mari Kiviniemi succeeded Prime Minister Vanhanen on 22 June 2010. A traditionally liberal party, the Swedish People’s Party has participated in almost all of the various coalitions.

Prime Minister Juha Sipilä’s Government, set up in 2015, was a majority government composed of the Centre Party, the Finns Party and the National Coalition Party. The Finns Party left the Government in summer 2017, but some of its MPs resigned from the party to form a new party, the Blue Reform (first the New Alternative Parliamentary Group), which continued in the Government. On 8 March 2019 Prime Minister Sipilä submitted his Government’s request for resignation to the President of the Republic, just a few weeks before the parliamentary elections held on 14 April.

The five parties that formed the majority government of Antti Rinne, appointed in June 2019, were the Social Democratic Party, the Centre Party, the Greens, the Left Alliance and the Swedish People’s Party of Finland. After the resignation of Rinne’s Government in December 2019, the present Government led by Prime Minister Sanna Marin continued with the same five-party coalition.