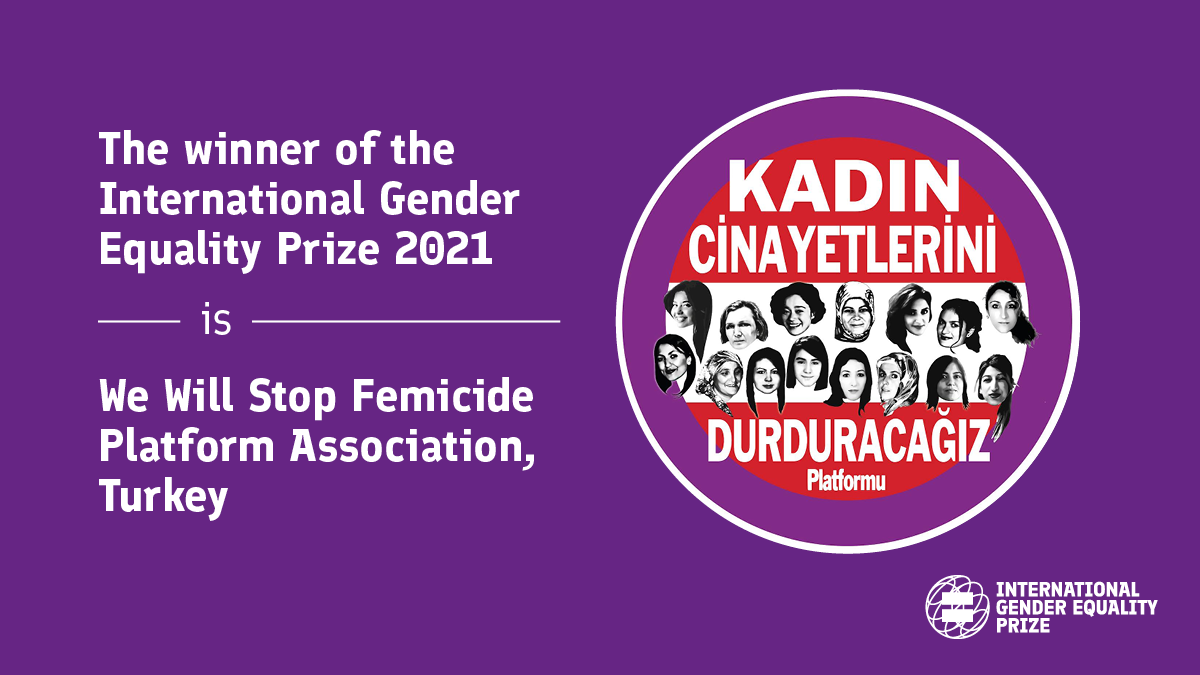 The Government of Finland awards the International Gender Equality Prize now for the third time. This year's prizewinner is We Will Stop Femicide Platform, an organisation that does groundbreaking work combating violence against women in Turkey and whose work has a global relevance.

Finland's Prime Minister Sanna Marin handed out the 300,000-euro prize to Gülsüm Önal, Founder, President and the General Representative of We Will Stop Femicide Platform, and Fidan Ataselim, Founder and Secretary General of the organization, in Tampere on 22 November 2021.

"With this prize, we showcase the role of gender equality as a cornerstone of sustainable development, but also how much work still needs to be done,” says Thomas Blomqvist, Minister for Nordic Cooperation and Equality.

Awarding the We Will Stop Femicide Platform provides a chance to generate wider public discussion beyond the borders of Turkey.

We Will Stop Femicide Platform has been striving to stop femicide and ensure women's protection from violence since 2010. The Platform provides legal assistance to women who want to be safe from violence, is involved in cases of violence against women and femicide with its lawyers and representatives, supports the families of the murdered women, and drives changes to legislation to protect women.

Thanks to the Platform's actions, penalty reductions have become more difficult and deterrent sentences have been attained.

"We have done what had to be done and what everyone should do. The fact that the fight in our country has been seen by the international community gives us great strength and happiness. The award coming from a country that promotes women's rights like Finland is also a source of pride for us," say Gülsüm Önal and Fidan Ataselim from We Will Stop Femicide Platform.

Over 400 proposals from all over the world were submitted for consideration for the award during the open nomination period. The Government of Finland made its decision based on the proposal by an independent international jury.

In 2017, the Government of Finland’s International Gender Equality Prize was awarded to German Chancellor Angela Merkel. She directed the prize money to a Nigerien organisation that works to stop domestic violence. The organisation is using the funds to build a shelter for women.

In 2019, the prize went to a global women’s rights organisation Equality Now, a global non-profit organisation, which has succeeded in changing discriminatory laws and ossified practices in different countries.

EU Digital COVID Certificates will be issued until 30 June 2023