Twinning: Azerbaijan on its way to better air quality

The Finnish Meteorological Institute and the Finnish Environment Institute have been engaged in a Twinning project relating to the development of air quality monitoring and management in Azerbaijan. The project has lasted two and a half years. It was implemented in cooperation with the Ministry of Ecology and Natural Resources of Azerbaijan. The project involved 80 trips of experts to Baku and to other parts of the country. “Organisations and people involved in Twinning projects consider them as learning experiences,” says Katja Lovén, Resident Twinning Advisor (RTA) in Baku. 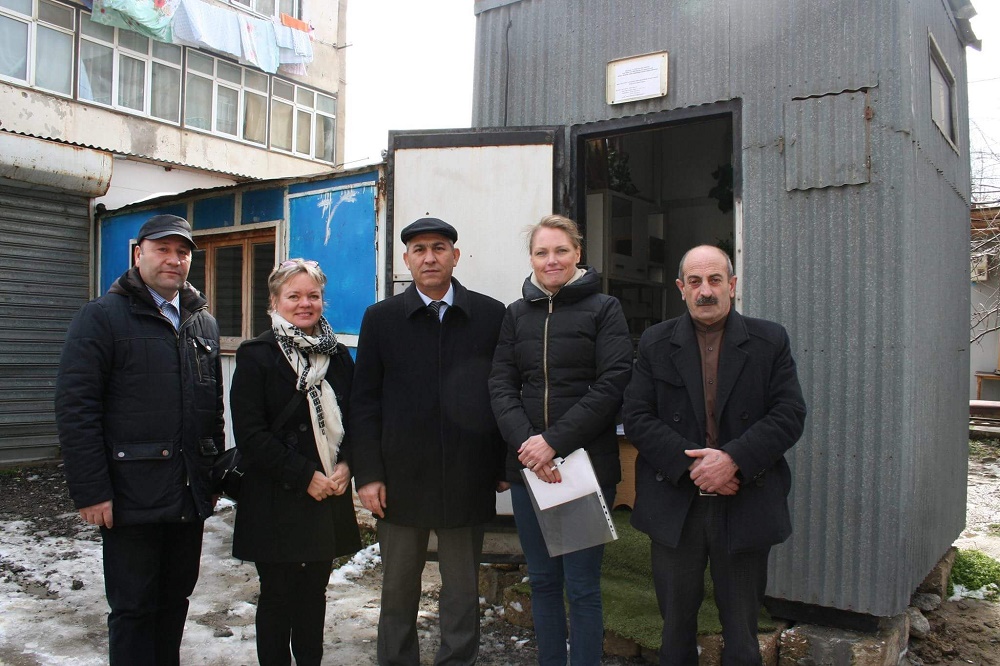 The project was launched in November 2016. It aimed to strengthen the monitoring of the state of the environment in Azerbaijan. From among the Member States of the European Union, Finland, Austria and Latvia participated in the consortium implementing the project.

EU Member States participate in competitive tendering for Twinning projects in which the beneficiary country selects the winner that will implement the project. Winning a tender is often preceded by keen competition, and in the selection of partners, it is good to consider all parts of the tender. As for Azerbaijan, the structure and division of work in the consortium of the EU Member States was carefully considered in the preparatory phase.

“The Finnish Meteorological Institute had experience of project work with the Environment Agency Austria, which is why we were able to develop the cooperation drawing on both organisations’ strengths. The Latvian Environment, Geology and Meteorology Centre contributed both Russian-speaking experts and provided expertise on the measurement equipment used in Azerbaijan. As a former Soviet state and current EU Member State, Latvia has experience of how to modernise measurement equipment used during the Soviet era so that the system meets the requirements of the EU criteria,” says Katja Lovén. 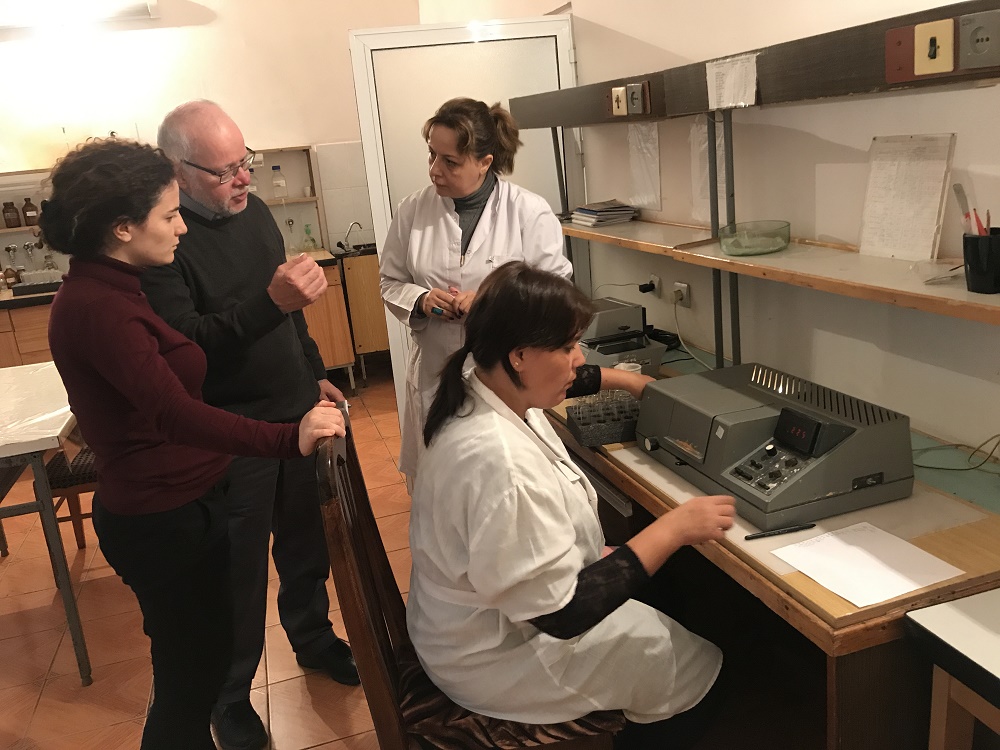 Despite the challenges posed by the operating environment, all the objectives set for the project were achieved.  The high quality of the activities was noted also in an external evaluation ordered by the Commission in spring 2018.

Special attention was paid to the visibility of the project and to disseminating information about of the results. In the context of the project, seminars were organised to enhance awareness of the importance of air quality, and there were also events organised by the EU delegation.

“From the point of view of raising awareness it was important that the local Ministry responsible for the matter was committed to our objective to make the measurement results publicly available. Currently, real-time monitoring data from one monitoring station in Baku is posted on the website of the Ministry. This keeps the question of air quality topical even though the project has ended,” Lovén says.

Azerbaijan’s commitment to reforms and development work shows also in that the country has decided to strengthen its measurement station network by installing new automatic monitoring stations in 2019–2023. Azerbaijan is planning to purchase 25 automatic air quality monitoring stations, equipped with modern technology. The first five new stations will be in Baku, the other 20 stations will be placed in different parts of the country.

As often in international project cooperation, this project also had its difficulties that slowed down progress particularly at its early stages and that were connected to both communication and workspaces.

Problems were solved in cooperation. In addition to project operators, the EU delegation and the Roving Ambassador of Finland for South Caucasus were involved in the discussion – their role was central to stabilising the situation. The matters were finally agreed on at the turn of the year 2017–2018. At the beginning of 2018, a new Minister of the Environment was appointed in Azerbaijan and cooperation with the Minister ran smoothly.

“As a project team, we received strong support from Ambassador Arja Makkonen and the EU delegation, which was satisfied with the results achieved by the project. The new Minister of the Environment was from the start very committed to the project and showed local operators that he trusted their expertise. This is an important signal,” says Katja Lovén. 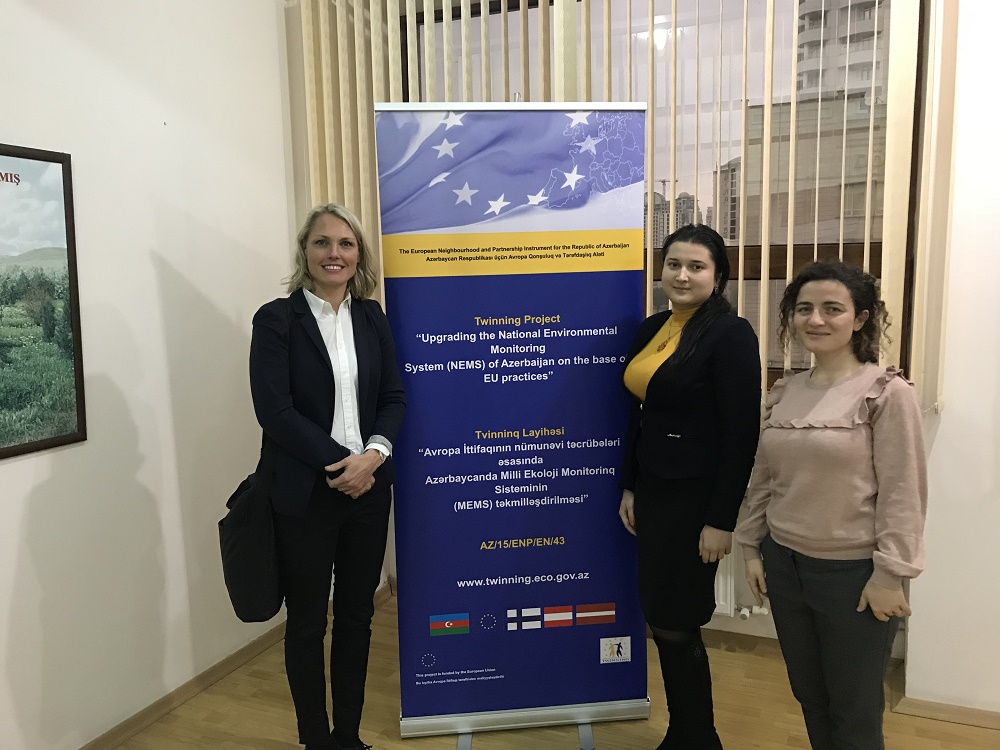 Assistants are invaluable to the advisor coordinating the project: their role is important particularly in countries where only a few know English. In the picture, Katja Lovén (left) together with her assistants Rahila Karimova and Gunel Soltanova. Photo: Rahila Karimova Twinning is a tool for learning

Twinning projects offer both the beneficiary country and the experts of the EU Member States implementing the project the chance to learn and to strengthen their expertise.

“Cooperation supports the beneficiary country in developing its activities. In addition, the expertise of specialists implementing the project also improves when they have to consider the practices applied in the Member State relative to the situation in the beneficiary country. Working in a different operating environment helps in looking matters from a new perspective, which can be useful for developing one's own organisation,” Lovén says.

Katja Lovén says that she learned one thing the hard way in Baku: one’s own expectations should correspond to the situation of the work environment. It is good to lower the bar if this helps the progress of the project. In addition, various practical problems are often met in everyday life and solving them shows how the society functions. This is strongly connected to understanding culture.

“You should approach projects with the attitude that you will learn from them,” says Lovén.

Finland and Azerbaijan in Twinning

Twinning projects are built on close cooperation between the EU Member States and beneficiary countries. The beneficiary country will have ownership of the results attained, which supports commitment to the projects. Working in the projects is based on collegial spirit and cooperation is conducted through peer-to-peer activities. The Twinning team at the Ministry for Foreign Affairs coordinates Twinning activities in Finland. Finland's network of diplomatic missions abroad is also involved in supporting Finnish Twinning operators in the beneficiary countries.

Azerbaijan has been an active Twinning operator – over the past ten years it has had the most Twinning projects of the European Neighbourhood Instrument (ENI) East countries after Ukraine. However, Azerbaijan is still less familiar to Finnish Twinning operators. In addition to the project of the Finnish Meteorological Institute and the Finnish Environment Institute, Finland has implemented only one project in the education sector in the country in 2015–2017.