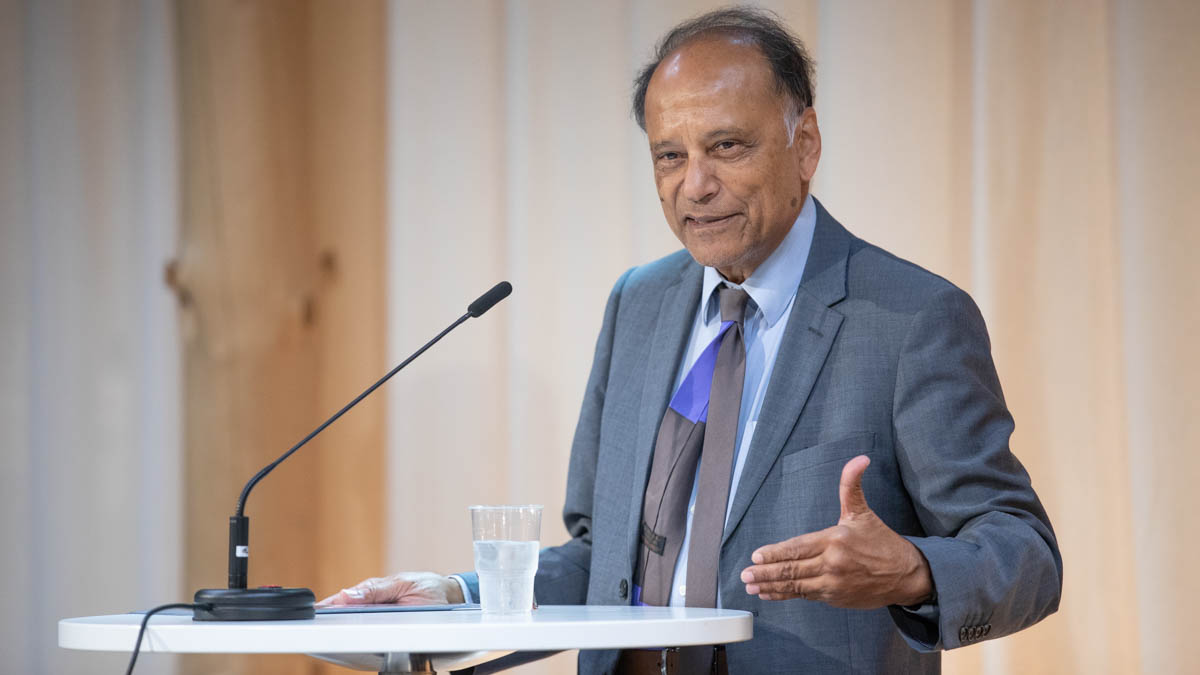 According to Professor Sir Partha Dasgupta, we need to make fundamental changes to how we think, act and measure success. Dasgupta spoke on Wednesday at a conference organised by the Economic Council around the theme of ecologically sustainable economic policy in the 2020s. The discussions were based on the Dasgupta Review, which has attracted wide international attention and emphasises the economic significance of biodiversity. The conference explored what Finland needs to do to implement the objectives of the report.

The Dasgupta Review, drawn up in 2021 under Professor Dasgupta’s leadership, emphasises the need for the sustainable use of the environment and natural resources; humanity and the economy depend on the services provided by nature, and nature should be considered one form of capital alongside economic and social capital.

“We have seen a sharp decline in natural capital in recent decades. Mitigating population growth will have a significant effect on the adequacy of natural capital, but we must also establish pricing for ecosystem services to curb excessive demand. At the same time, we need to make fundamental changes to how we think, act and measure success. We also need supra-national funding systems so that burdens can be shared in a sensible way,” Dasgupta said, describing the findings of the review.

In her opening speech, Prime Minister Sanna Marin, who chairs the Economic Council, recalled that policymakers have already realised the severity of the global climate crisis, and that similar political will is now needed to halt the loss of biodiversity.

"How can we make the economy and the environment work together in a manner that will provide welfare for our citizens without risking the ecological capacity of the planet and the wellbeing of future generations?"

Research project on economic dimensions of biodiversity now under way

“We should treat natural capital like any other asset, and we must look after it for future generations. The sooner we act to halt biodiversity loss, the less we will have to pay for the measures. Combating biodiversity loss – just like climate change – must be integrated into all decision-making. It must guide the economy towards the green transition and ultimately form the basis for everything we do as human beings.”

The aim of the current research project is to determine which issues related to biodiversity loss are most important for the Finnish economy and what impact the state of biodiversity has on the economy.

“As a prosperous and developed country, Finland must take an active approach to halting biodiversity loss. This is even more necessary because the biodiversity footprint of Finnish consumption extends far beyond our national borders. Combating biodiversity loss requires multinational cooperation. On the other hand, a great deal can be achieved through local measures, which is why every action taken to combat biodiversity loss is important.”

Work on defining risks to biodiversity only just beginning

In her speech, Minister of Finance Annika Saarikko emphasised how challenging it is to safeguard biodiversity through economic policy instruments and noted that the work to identify and define risks to biodiversity is only just beginning.

“Emission-based taxes and emissions trading, among other things, have been used to mitigate climate change. However, biodiversity is difficult to address with equally straightforward economic control. Therefore, in addition to taxes and fees, the range of instruments must also include legislation and lighter measures, such as advice and voluntary commitments,” said Saarikko.

Saarikko noted that the Coalition of Finance Ministers for Climate Action, led by Finland and Indonesia, is currently discussing how to integrate aspects related to biodiversity and biodiversity loss into its work.

“A report on nature-related risks and policy recommendations will be published in June.  The aim of the report is to enable us as finance ministers to better identify the economic impacts and risks of biodiversity loss and to take them comprehensively into account in planning economic policy.”

Draft budget of the Ministry of Economic Affairs and Employment focuses on promotion of employment, renewal and low-carbon economy