Prime Minister Marin: By helping and supporting each other, we can get through difficult times 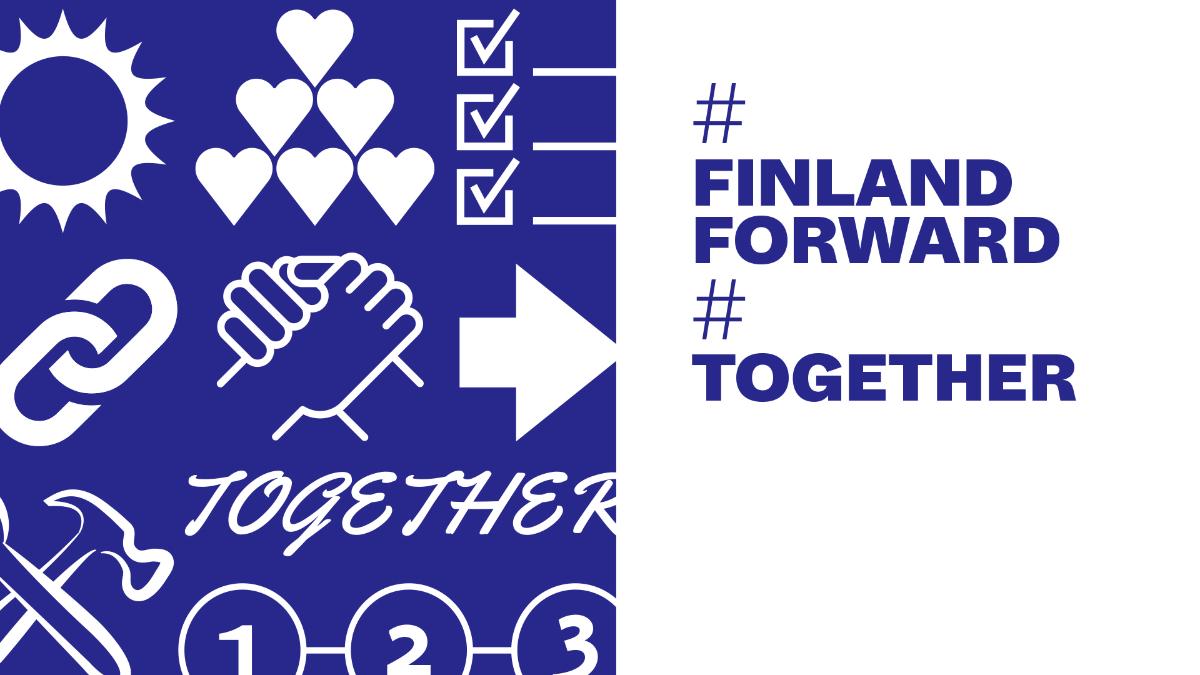 The state of emergency affects all of us. We have had to limit or give up many of the things that are important to us. For many of us, concerns about our own and our loved ones’ health, wellbeing, livelihoods and ability to cope are a constant presence in our everyday lives. In the midst of the crisis, it is good to stop and think about how we are doing and how we can support each other through these difficult times.

“We all encounter exceptional times and circumstances in our daily lives, but each in our own way. Although we are all dealing with this crisis, it affects people in different ways,” says Prime Minister Sanna Marin.

The Government wants to do its part to support this everyday work. The aim of the new Finland Forward communication campaign to get people involved and give visibility to the great everyday work being done by various actors in society. The project provides an umbrella under which different events can be organised, for example, now in virtual form and later, once the exceptional situation is over, in the real world. The project will continue until January 2021, but the goal is that something more permanent will emerge from it. Something that will carry far into the future.

“We are grateful to see that so many people, organisations and businesses are willing to help and support others. Someone may go to the shop on behalf of an elderly person, another helps a pupil with their distance learning assignments, and a third works to safeguard the health and wellbeing of others. Big and small acts, all of which are needed in these difficult times,” says Prime Minister Marin.

Tell your story using the hashtags #finlandforward #together

The Government Communications Department and its partners are sharing moments of help, encouragement and support in Finland during the crisis with the hashtags #finlandforward #together.

Read more about the campaign at finlandforward.fi

Do people help each other? The answer is yes. The majority of people living in mainland Finland say they have helped others during the COVID-19 crisis. Most often, people have helped their family members and relatives who do not live in the same household. They have also helped friends, neighbours and small business owners. People’s willingness to help is evident from a Statistics Finland survey commissioned by the Prime Minister’s Office, which examined the views of 15–74-year-olds in an online questionnaire on 2–5 April 2020.

Finns felt they had been well informed of the changes in their lives caused by the COVID-19 crisis. As many as nine out of ten respondents (89%) reported that they were well or fairly well informed about the effects of the COVID-19 on their daily lives. People had primarily received information from the main communications channels, such as television and newspapers, but discussions at workplaces, places of study and with people’s close circles were also considered important. Finns were satisfied with the authorities’ communications on the situation with regard to the coronavirus. Communications were considered reliable and balanced.

Information helps people commit to following instructions. As many as 96 per cent of the respondents reported that they had followed the instructions given by the authorities either well or fairly well. The majority of respondents (87%) were happy or rather happy to do so.

More information about the timetables for vaccination certificates