PISA 2018 Financial literacy: Robust skills and responsible use of money among Finnish students 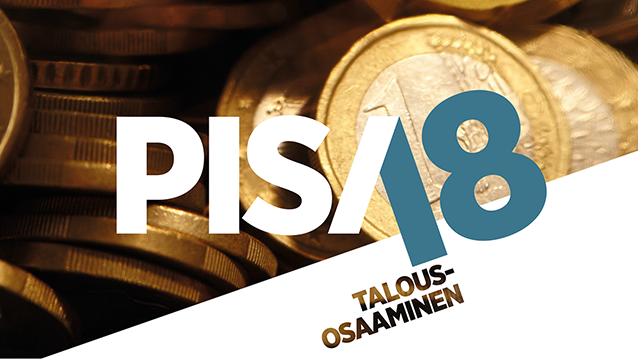 Of all the participating countries, Finland had the highest percentage of top performers at performance level 5 (20% of students). In Estonia (19%) and Canada (17%), the share of top performers was almost the same (OECD average of 10%). At the same time, 2.4% of Finnish students fell below the lowest performance level of 1. Of the other highest performing countries, Estonia’s equivalent figure was a mere 0.7% (OECD average 4%).

In Finland, there is an even distribution in financial literacy between schools, and the differences between schools were the smallest in the entire assessment. At the same time, however, the variation within schools was the largest, and clearly stronger than in reading literacy, for example. In other words, both the weakest and the strongest financially literate were found at the same school. No regional or educational differences were observed. The average score in financial literacy skills of Finnish-speaking students was 538 points and that of Swedish-speaking students was 522 points.

The average score for Finnish girls was 540 points and 534 points for boys. The 6-point difference was not statistically significant. Altogether 21% of Finnish boys ranked at the top level (level 5). The equivalent percentage in Estonia was 20% and 19% in Canada (OECD average 13%). The corresponding percentage for girls was 19% in Finland, 18% in Estonia and 14% in Canada (OECD average 10%). Altogether 12% of Finnish boys and 8% of girls fell short of proficiency level 2. This difference was statistically significant.

In financial matters, Finnish young people behaved roughly as responsibly as young people did in OECD countries on average. Responsible behaviour was also positively linked to financial literacy. With regard to consumer behaviour, the comparison of product prices was very common for Finnish young people and showed a somewhat stronger link with proficiency than the OECD average. Finnish young people expressed the greatest interest in monetary matters among the participating countries. Their readiness to make decisions on their own finances was high in international terms.

Financial literacy was strongly linked to reading literacy and numeracy, but it also played a role independent of other assessment domains. Finnish young people were more financially literate than could be expected on the basis of their skills in numeracy and reading literacy. One of the underlying reasons for this is that especially boys showed greater financial literacy than literacy in other assessment domains.

In Finland, financial skills are not taught as a separate subject in comprehensive school, but contents of financial skills can be found at least in the curricula of mathematics, home economics and social studies. The lessons in money matters learned at school played an important role in terms of producing financial literacy in Finland. The assessment supports the view that the contents in financial skills taught in Finland are successful, and this is very strongly linked with the financial literacy of students. The entire basic education of students who took part in the assessment was built on the 2004 curriculum, and the 2016 core curriculum did not have time to influence the educational contents of the students who took part in the assessment.

Link to report (only in Finnish)