Police Barometer: Finns continue to have strong confidence in police 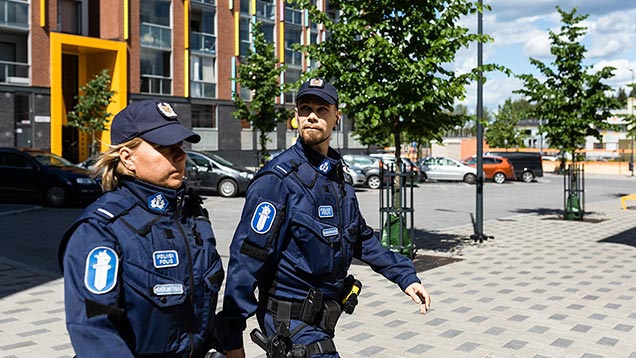 The majority of Finnish people continue to have confidence in the police. According to the latest Police Barometer survey, a total of 91 per cent of the respondents trust the police a lot or a fair amount. Trust in the police has slightly decreased compared to the previous survey (2018: 95 per cent). Based on the results, the police have succeeded well in performing their most important duties and the work of the police is appreciated.

“From the point of view of Finnish society and the legal system, it is important that people trust the police and other security authorities. The level of public confidence is high in Finland, but to ensure this the authorities have to work actively every day. Trust is earned in each face-to-face situation,” says Minister of the Interior Maria Ohisalo.

The police are successful in performing those operational duties that people consider to be the most important duties of the police. These include emergency response, and prevention and investigation of violent crime. The respondents also consider that the police are fair and treat them fairly well.

Although fewer and fewer people fall victim to a crime and the number of homicides and property crimes, for example, has reduced over the long term, trust in the effectiveness of police activities has slightly decreased in recent years.

“In the last decade, the number of police officers was reduced by hundreds, but now the political decision-makers have started to increase the number of police officers. This is a step towards the right direction and also necessary to ensure the effectiveness of police activities. The police are doing their utmost to ensure people’s everyday safety and security in Finland,” says National Police Commissioner Seppo Kolehmainen.

Trust in police has remained high for a long time

Finland ranks among the leading countries in the world in many surveys relating to security. This is also reflected in the fact that people’s trust in the security authorities in general is very high. Along with the police, the rescue services, the Border Guard and the emergency response centres enjoy widespread trust among the public.

“By international comparison, public trust in the police has remained high in Finland year after year, and I am very pleased about it. However, at the same time, expectations placed on the police are very high — good results lead people to set the bar high for the police,” says Minister Ohisalo.

Roughly 39 per cent of the respondents considered it fairly or very likely that there were corruption and unethical conduct within the police. Public opinions on corruption within the police became more negative in 2012 and 2014, and they have remained below the earlier level.

Ensuring equal access to police services and making the police visible for everyone throughout Finland is a permanent development area for the police. The majority of the respondents considered that the police were fully or mostly able to fulfil their responsibility for ensuring public order and security in the country. In the opinion of about 15 per cent of the respondents, the police were able to ensure public order and security only to a little extent or hardly at all. The distribution of answers is somewhat more polarised than in the surveys conducted in the 2010s. This is partly due to the fact that the available services are unevenly distributed across both densely and sparsely populated areas.

People most concerned about drunk driving

In the last two years, people have become less concerned about different criminal phenomena in all areas of life. People have also become considerably less concerned about different criminal phenomena, with the exception of cybercrime, over a longer period of time — both in the 2010s and during the whole period when the research has been conducted.

The respondents were also asked how serious they felt the crime situation was in their neighbourhood. About 79 per cent of them answered that the situation was not very serious or not at all serious.

The Police Barometer survey was conducted before the outbreak of the coronavirus (COVID-19) epidemic in Finland. The results of the present survey reflect the situation in Finland at the time of the survey, i.e. between 4 February and 3 March 2020. A total of 1,082 people were interviewed in the survey. They were residents in mainland Finland and aged between 15 and 79. The Police University College is responsible for analysing and reporting the results.

The Police Barometer has studied public opinion on the Finnish Police and the internal security situation in Finland for over 20 years. The survey is conducted every two years.

Recommendations for academic cooperation with China