Finland's imprint is visible in the fight against desertification

In a report last autumn, the UN warned about the consequences of soil degradation and desertification. There are no deserts in Finland but that is also why we may have key solutions to the problem. 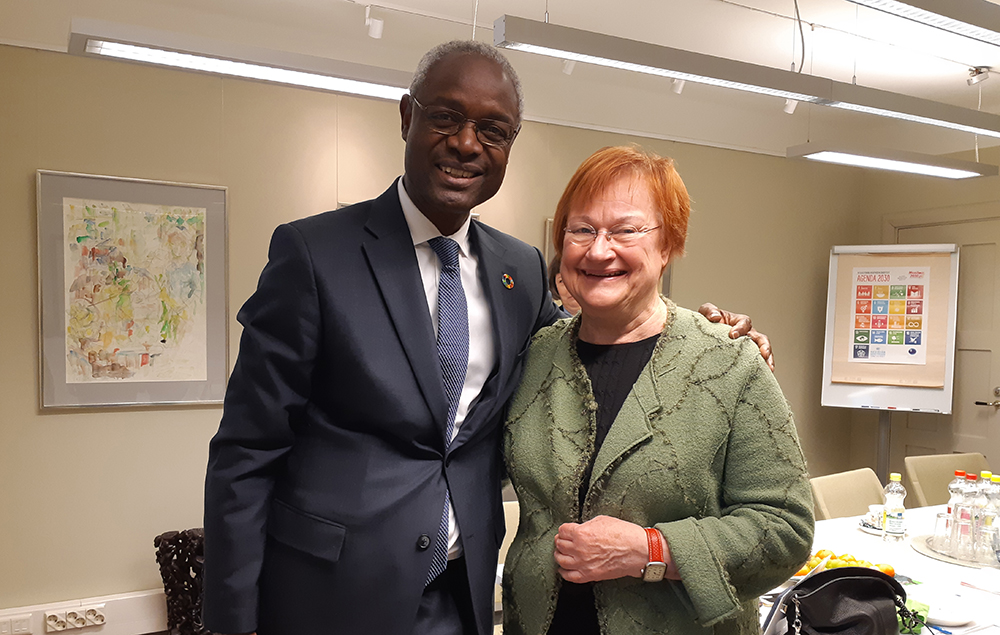 During his visit to Finland, Secretary-General Ibrahim Thiaw met, among others, former President Tarja Halonen, who is the Drylands’ Ambassador for the UN Convention on Desertification. Photo: MFA / Katharina Bäckman

The challenge is being addressed daily by Executive Secretary of the United Nations Convention on Desertification (UNCCD) Ibrahim Thiaw, who visited Finland this week. Thiaw stresses that the problem is strongly affecting the whole world, even though for a heavily forested country in the north desertification may seem a distant issue.

"The consequences of the problem are met even in countries where soil degradation is not among the main concerns, because in today's world we are all in the same boat. When the situation escalates in one part of the world, people are forced to flee elsewhere.”

Recently, extensive bushfires destroyed vast areas of forests in Australia. People all over the world were informed about the power of the fires through different media spreading pictures of the fires. From the perspective of soil, other extreme weather conditions are also disastrous.

“Loss of vegetation in flames can lead to two things, both of which were seen in Australia simultaneously. Heavy rain washed out soil and drought led to dust storms.”

Progress in goals advocated by Finland

However, the Executive Secretary of the UN Convention wanted to bring also good news, and these concern Finland, too. Right now, people everywhere in the world show enthusiasm for planting trees and millions of trees are planted in various campaigns. Planting trees can be sustainable if it benefits local populations and is suitable for local land use.

“Finland has cutting-edge forest expertise that should be shared with the rest of the world, including the technology needed for the restoration of land and the management of solar panels and other energy production in dry areas,” Thiaw says.

Finland's foreign policy, which promotes equality, has also left its mark on the key texts of the UN Convention. In many countries, food production is in practice women's business, but at the same time, they lack access to decision-making concerning land use or land ownership. Women have more limited access to financing or technology to solve land use problems.

During Finland's Presidency of the Council of the EU, these issues were for the first time raised on the agenda of the Conference of the Parties to the UN Convention to Combat Desertification. The next step is to transpose the equality policy into Member States’ national legislation.

"The decision was significant, considering that many countries expressed uncertainty about the matter. At UN meetings, things move forward through joint decisions and not through voting, and change requires strong political will.”