Join us for the closing event at Helsinki Central Library Oodi
Conference on the Future of Europe to wrap up on Europe Day, 9 May 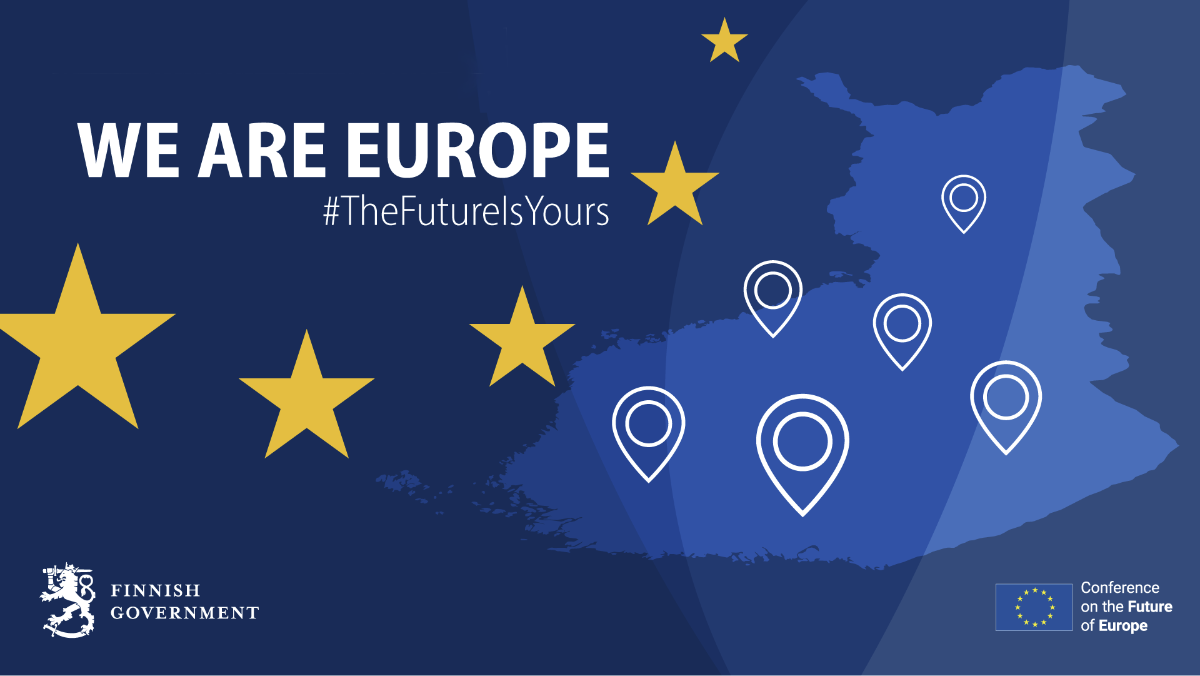 The Conference on the Future of Europe, which kicked off on Europe Day of last year, has gathered the views of citizens on the future challenges and opportunities facing the EU. Now, one year later, the conference is coming to a close and it is time to assess the results. Join us at Helsinki Central Library Oodi to hear about the conference and discuss the future of Europe with Minister Sirpa Paatero and Commissioner Jutta Urpilainen on Monday 9 May at 14.00. The event is open to everyone, and coffee and snacks will be served.

As part of the conference, Finland organised the ‘We are Europe’ series of events last autumn and early this year. A total of 19 events were organised in different parts of the country, from Helsinki to Utsjoki. Each discussion was attended by a government minister, with altogether 12 ministers taking part. The events were organised in cooperation with a variety of partners, such as cities. In February, the Government published a summary of the discussions held during the series of events and the views Finns expressed about the future of Europe.

“Finland has invested very strongly in the Conference on the Future of Europe with the national ‘We are Europe’ series of events, along with other initiatives. It is important that the messages we received from citizens are also taken into account in the conclusions of the conference,” says Minister of Local Government Paatero.

“I am pleased at how actively Finns participated in the ‘We are Europe’ events held around the country. At the events, we were able to collect a great deal of thoughts and ideas from citizens about the future of Europe. We have put these ideas together in a single document as part of the conference, and I also delivered them to my French counterpart in Paris,” says Minister for European Affairs Tuppurainen.

The discussions at the ‘We are Europe’ series of events revealed that Finns want the EU to take concrete action to combat climate change, to assume a stronger role in guaranteeing security, and to develop a common migration and asylum policy. A unifying theme raised in the discussions was the importance of strengthening the EU’s resilience to crises. The common values of the EU, such as democracy, the rule of law, fundamental rights, equality and minority rights, also featured prominently in many of the discussions.

The final report on the Conference on the Future of Europe will be submitted to the Presidents of the Council, the Commission and the European Parliament on Europe Day, 9 May. After this, each of these institutions will consider the proposals and decide on further measures to be taken within their mandates and in line with the EU Treaties.

New model developed for dialogues between citizens, communities and authorities

Minister Tuppurainen: A strong and united EU is in Finland’s interest