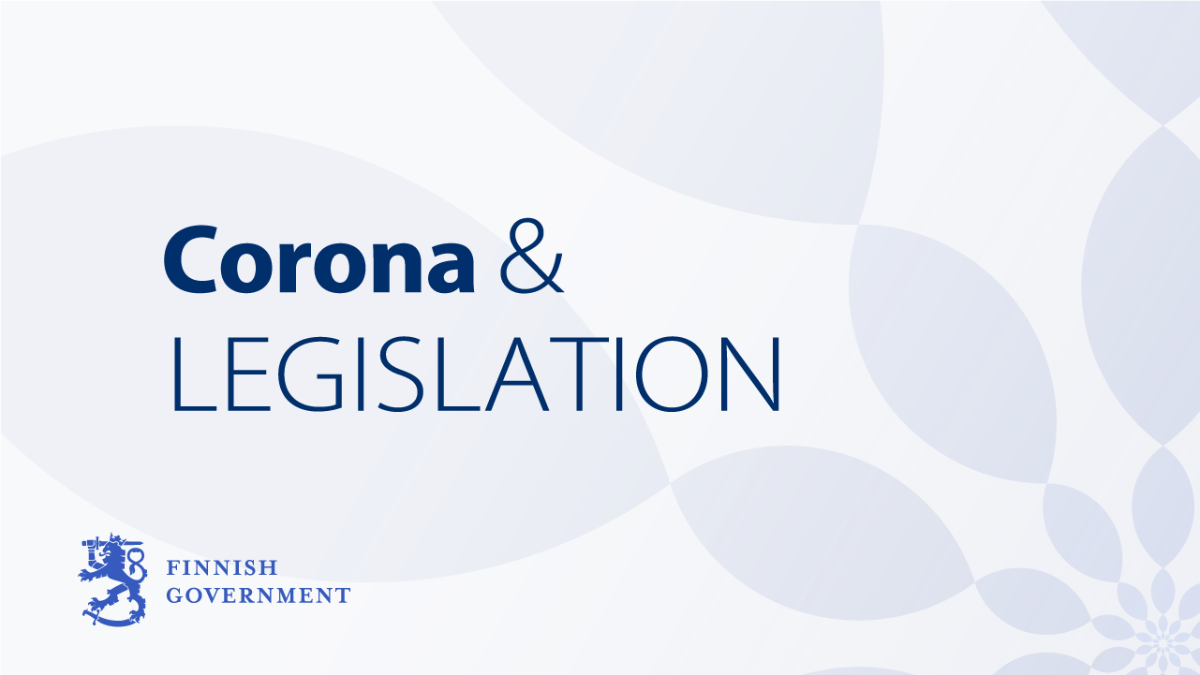 In its negotiations on Tuesday 9 June, the Government discussed how to implement the next steps needed to deal with the epidemiological situation by developing the legislation on normal conditions. Reports prepared by the cooperation group for the development of legislative drafting and the Prime Minister's Office provided a basis for the discussion. The Government also received an overview of the epidemiological situation from experts from the Finnish Institute for Health and Welfare and the Ministry of Social Affairs and Health. The Government will discuss the need to extend the use of powers under the Emergency Powers Act on Monday 15 June.

The Government notes that the use of powers laid down in the Emergency Powers Act, which were adopted due to the COVID-19 pandemic and will remain in force until 30 June, has been based on the assessment that these powers are necessary to protect the population from the consequences of a highly widespread communicable disease and to safeguard fundamental rights and human rights under emergency conditions. In particular, the aim has been to ensure the adequacy of healthcare and social welfare services and to safeguard the carrying capacity of intensive care during the crisis.

In line with its hybrid strategy, the Government notes that although the threat of the spread of the coronavirus and the escalation of the epidemic still exists, the current epidemiological assessment suggests that the situation, in particular the adequacy of healthcare and social welfare services and the capacity of intensive care, will not necessarily need to be supported by the measures taken under the Emergency Powers Act after 30 June. However, before decisions can be made on the matter, it is still necessary to monitor the effects of the lifting of restrictions and to ascertain whether such decisions would be justified. The Government will discuss the need and grounds for continuing the use of powers under the Emergency Powers Act on 15 June.

We are still facing the threat of a resurgence in the spread of COVID-19. With this in mind, the Government is preparing for the measures needed to deal with the situation by developing its legislation on normal conditions. If the situation so requires, it is also possible to reintroduce the powers adopted under the Emergency Powers Act.

Amendments to the Communicable Diseases Act, the Health Care Act and the Social Welfare Act related to the application of the Emergency Powers Act are being prepared in such a way that the proposals can be submitted to the Government for a decision in August.

In addition to these, the preparation of amendments to the Communicable Diseases Act will continue as a matter of urgency in the following areas: restrictions on the use of restaurant premises and other similar commercial facilities, more detailed definitions of public events and public meetings, and the decision to isolate an individual in an apartment or other location approved or designated by the decision-making authority.

The Government decided earlier to submit proposals for the transfer and specification of powers conferred under the Emergency Powers Act into the legislation on pharmaceutical care and education and training under normal conditions.

Legislation adopted in response to the Covid-19 epidemic

Since declaring a state of emergency, the Government has as of 5 June issued 14 decrees on the use and continuation of powers under the Emergency Powers Act. In addition, the Government has submitted 44 government proposals and four supplementary budgets to Parliament (see appendix). The purpose of the acts included in these proposals has been to respond to the problems brought on by the acute crisis caused by the epidemic and to ensure the conditions for the functioning of society during the pandemic.

The legislative amendments have been related to the following aspects of society: the labour market and social security, business subsidies and financing, public finances (of the central government and local authorities), restrictions on the freedom to conduct business and the dismantling of the restrictions, immigration (ensuring the availability of seasonal labour), pharmaceutical services, basic education, vocational and higher education, and transport (especially maritime transport).

In addition, temporary changes have been made to administrative processing times and other deadlines. As a rule, the acts have bene laid down on a temporary basis.