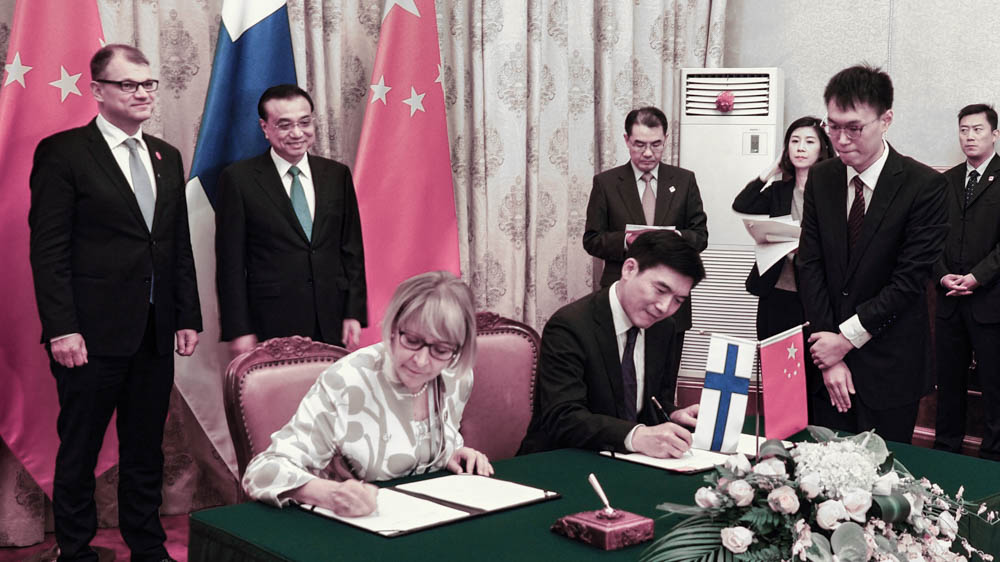 A greater number of trade and investment agreements and letters of intent were signed during Prime Minister Juha Sipilä’s visit to China than ever before in connection with a Team Finland visit led by a Finnish minister. The number of agreements signed this week is as high as 54.

“The visit is a culmination of high-level political discussions and preparations over several years. Our cooperation in China is based on good and extensive relations. We believe that these agreements prepared within the Team Finland framework may bring several billion euros to Finland in the coming years through investments and commercial cooperation,” says Marja Rislakki, Finland's Ambassador to China.

In hundreds of meetings held within a few days, the business delegation of more than 60 people discussed possible concrete cooperation projects that could be launched on the basis of the Joint Declaration issued during President Xi's visit to Finland in April. Future cooperation opportunities were reviewed in, for example, the energy sector, cleantech and digital solutions and education. Finnish expertise in winter sports is also of interest to China because it is preparing for the Olympic Winter Games in Beijing in 2022.

"This has been a very successful trade mission. Our hosts have expressed great and genuine interest in what the Finnish companies have to offer. The Chinese companies have also greatly valued the presence of Prime Minister Sipilä and his meetings with the President and Prime Minister of China,” says Risto Siilasmaa, Chair of Nokia's Board of Directors, who led the business delegation.

More than 300 people took part in the Finnish-Chinese Economic Forum arranged by Finpro in Beijing on 29 June.

“In addition to trade between our countries, investments are increasing too. China has become the number one country for Finnish private investors, and Chinese investors have found Finland, of which I am very pleased,” Prime Minister Sipilä said in his opening speech in the Forum.

In connection with the Economic Forum, a Committee for Innovative Business Cooperation between Finland and China met for the first time. The Committee appointed by the Finnish Ministry of Economic Affairs and Employment and Chinese Ministry of Commerce has representatives from companies in both countries. Its aim is to open up opportunities for cooperation and business and create positive visibility for companies in both China and Finland.

Altogether 14 companies representing a wide range of Finnish business and industry have been appointed to the Committee. The Committee is chaired by Risto Siilasmaa, Chair of Nokia’s Board of Directors.

“China is the second largest economy in the world and growing fast. For many reasons there are considerable opportunities for Finnish companies to succeed in the demanding markets of China.  The Committee provides a new opportunity for cooperation between our countries,” Siilasmaa says.

Finland’s representatives in the secretariat coordinating the activities of the Committee are Confederation of Finnish Industries, Finpro and Tekes - the Finnish Funding Agency for Innovation. China is represented by a chamber of commerce that promotes foreign trade in the machinery and electrical equipment sector. The chamber has nearly 10,000 member companies.