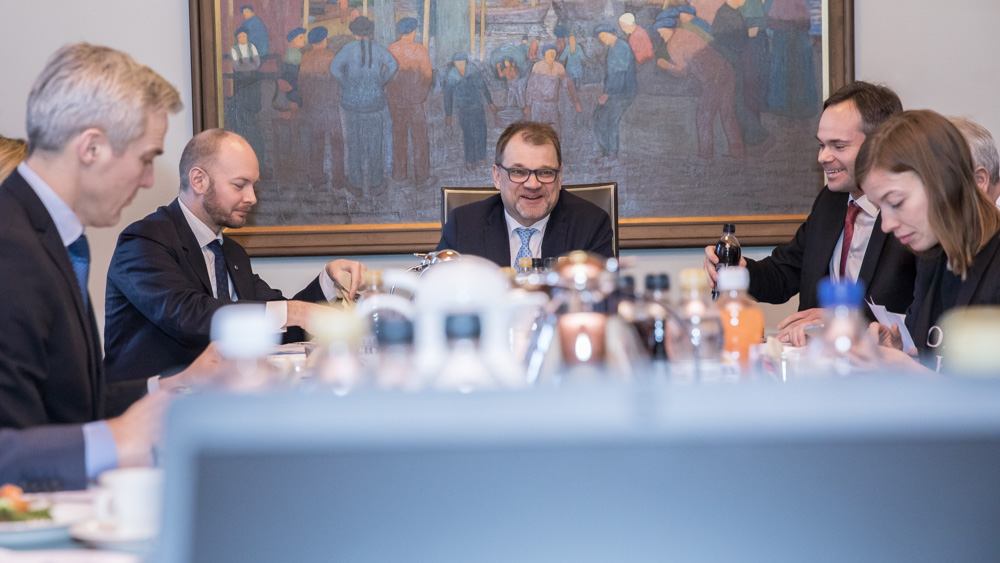 Prime Minister Juha Sipilä invited the parties in Parliament to Kesäranta, the Prime Minister's Official Residence, in November for a round table discussion on climate policy. In their meeting, the representatives agreed that the parties would work together to prepare a climate strategy. The parties have prepared the strategy in a working group headed by Minister of the Environment, Energy and Housing Kimmo Tiilikainen. On Thursday 20 December, based on the preparations of the working group, the eight parties in Parliament decided on unified climate policy objectives. The parties involved were the Centre Party, the National Coalition, the Social Democratic Party, the Blue Reform, the Greens, the Left Alliance, the Swedish People’s Party and the Christian Democrats.

The Paris Climate Agreement was signed in 2015 and ratified one year later. Implementation of the Agreement will start in 2020. Under the Agreement, the increase in average global temperatures will be limited to less than two degrees, ideally just 1.5 degrees. In order to accomplish this, a global balance between greenhouse gas emissions and sinks must be achieved by 2050.

According to scientific estimates, the realisation of the commitments made by countries as part of the Paris Agreement would, however, lead to a global temperature increase of around three degrees. This means that all party countries must strengthen their climate measures significantly in order to achieve the goal of the Agreement. The mean global temperature has already risen by one degree compared to the pre-industrial age.

The report released by the Intergovernmental Panel on Climate Change in November described the differences between a temperature increase of 1.5 and 2 degrees. To put it briefly, hundreds of millions of people would be left without the basic requirements for life, such as clean water and food. This, in turn, would lead to conflicts and migration crises. Achieving the goals of the 2030 Agenda for Sustainable Development will be next to impossible if we are unable to limit the temperature increase to 1.5 degrees.

The EU and Finland have committed to the Paris Agreement. In 2014, the EU committed to reducing greenhouse gas emissions by 40 per cent of the 1990 level by 2030. A source of increased ambition in negotiating on legislation for implementing emissions reductions has been the estimate of the European Commission, according to which the EU will achieve around 45 per cent of the required emissions reductions by 2030 through the current commitments. Following the release of the IPCC report, the EU has announced that it is prepared to update its own commitments in 2020.

When implementing measures to achieve emissions goals, it is essential to take into account social fairness and to ensure that certain population groups are not left with an unreasonable payment burden. For example, solutions related to taxation must be socially sustainable.

Unified climate policy goals of the parties in Parliament

1. The climate policies of the European Union and Finland will be renewed so that we can do our part to limit the global mean temperature increase to 1.5 degrees. The EU’s long-term climate measures must be developed so that the EU can achieve carbon neutrality before 2050.

2. Achieving carbon neutrality in the EU by 2050 requires tightening the emission reduction obligations for 2030 to at least 55 per cent of the 1990 level.

3. The EU must promote the effective implementation of the Paris Agreement, as well as the pricing of carbon dioxide emissions and the calculation of carbon footprints worldwide. As the world moves toward low-carbon development, ambitious climate policy will also support the competitiveness of European industry.

Development of emissions trading in the EU

4. Further measures to tighten the EU’s emissions reduction goals must be focused on the emissions trading sector so that energy production and industry can progress towards low-carbon approaches in all Member States. Finland is working actively to develop the EU emissions trading scheme so that the price of emission allowances guides operators toward emissions reduction quickly and efficiently. At the same time, the competitiveness of European industry must remain a top priority.

5. Emission allowances on the market must be decreased on an annual basis from the current 2.2 per cent decrease to one that is significantly larger. Unused emission allowances must be voided and emissions trading must be expanded to cover property-specific heating and cooling costs, for instance. Additionally, the scope of emissions trading for air transport will be broadened.

6.  We will tighten Finland’s emission reduction obligation under the Climate Change Act. In the 2040s, Finland will reach a situation where our greenhouse gas emissions are clearly negative, meaning that we will remove greenhouse gases from the atmosphere through sinks at a greater rate than we produce them.

7. We will prepare a comprehensive carbon sink policy for the land use sector. We will grow Finland’s carbon sinks in the long-term through measures including increasing forest growth, initiating broad-scale afforestation, taking strong measures to mitigate deforestation, reducing peatland emissions and developing carbon sequestration in agriculture.

8. In Finland, electricity and heat production must be made nearly emission-free by the end of the 2030 while also taking into account the perspectives of security of supply and servicing.

9. We will increase the effectiveness of budgeting for sustainable development by integrating a climate sustainability assessment into the planning of government finances.

10. We will promote low-carbon and emission-free transport.

11. Research, development and innovation funding for the mitigation of climate change must be increased in both Finland and the EU. We will reinforce the export value of our climate solutions.

12. We will increase climate funding in development policy with the goal of reducing greenhouse gas emissions, easing adaptation to climate change and strengthening the development of carbon sinks.

13. We will promote circular economy and sustainable consumption and production by developing climate footprint calculations and for the lifecycles of products and the related product labelling.